Inflation: The Good, The Bad, and the Outright Ugly

Let’s get the worst out of the way. Without question, inflation data in June was terrible. In fact, June was significantly worse than expected, with headline Consumer Price Index (CPI) and Producer Price Index (PPI) inflation running at 9.1% and 11.3% versus a year earlier, versus expectations of 8.8% and 10.7%, respectively 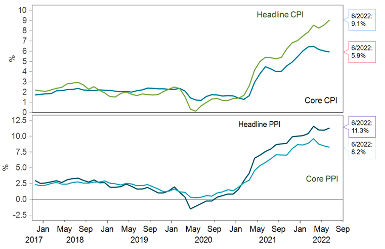 Consensus forecasts for the world economy in 2022 have changed dramatically. Despite upbeat June jobs and retail sales reports, economists slashed 2Q GDP estimates in recent days, with Bloomberg’s consensus median for 2Q moving from 3.0% on July 14 to only 0.9% currently. 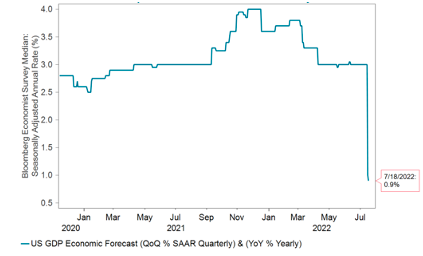 Over the same period, projected 2022 4Q y/y growth estimate went down from 1.4% to 0.8%. These numbers indicate a “stall speed” growth, which suggests that economists see coin-flip odds of a recession ahead (per Bloomberg survey). Bloomberg’s results are also echoed in data from the Federal Reserve Bank of Atlanta.

The Atlanta Fed’s tracker puts Q2 GDP growth at -1.5% following a -1.6% contraction in Q1. That would meet the unofficial definition of a recession as two consecutive negative GDP quarters. But it would not meet the “official” NBER definition, which defines a recession as “a significant decline in economic activity spread across the economy, lasting more than a few months, normally visible in real GDP, real income, employment, industrial production, and wholesale and retail sales.”

The fallout from the war in Ukraine on energy prices, hawkish central banks, and prolonged lockdowns from China’s Zero-COVID policy have also been major drivers of the forecast revisions.

If there is a silver lining to be found, it is that after being large net debtors for several decades, American households overall have developed “fortress balance sheets” during the pandemic. Liquid assets (by our definition*) now exceed total debt for the first time in three decades. While rate increases will likely continue to rise and slow the economy, the good news is that households may be net beneficiaries of rising short-term interest rates if they start earning serious interest income on their $17.9 trillion in liquid assets. 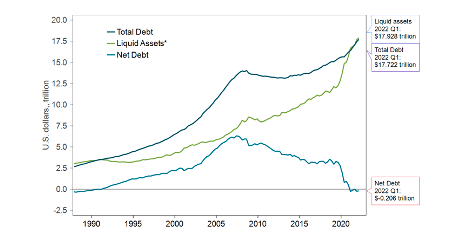 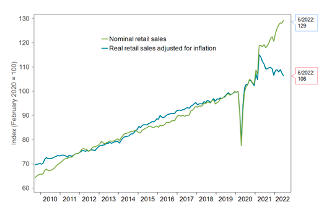 Further, while inflation has clearly eroded consumers’ spending power, American households are spending more even if they are enjoying it less. In June, retail sales jumped 1.0% m/m versus 0.9% expected and a (revised upward) -0.1% decline in May. This was a new record for retail sales in dollar terms, up 29% from February 2020. That said, deflated by the CPI component for goods, the real value of retail sales peaked in March 2021 at 15% above its February 2020 level.

Where Do We Go From Here?

Inflation remains top of mind for everyone, but perhaps even more so at the Federal Reserve. If the Fed increases rates by 175 bps by November 2nd (as is widely expected), the 3m-10y and 3m-2y yield curves will invert by about 25 bps and 45 bps respectively. Unless the Fed pauses soon, recession odds will rise substantially. The cautious optimism on inflation that we saw back in April has dissipated and the call for tighter monetary policy and slower growth to curb inflationary pressures has left no room for complacency at the Federal Reserve.

Past performance is not a guarantee of future results.

Diversification does not guarantee a profit or protect against a loss in declining markets.

Investing involves risk including possible loss of principal. There is no guarantee that these investment strategies will work under all market conditions, and each investor should evaluate their ability to invest for a long term, especially during periods of downturns in the market.

This does not constitute investment advice or an investment recommendation.

This represents the views and opinions of GW&K Investment Management. It does not constitute investment advice or an offer or solicitation to purchase or sell any security and is subject to change at any time due to changes in market or economic conditions. The comments should not be construed as a recommendation of individual holdings or market sectors, but as an illustration of broader theme.

Data is from what we believe to be reliable sources, but it cannot be guaranteed. GW&K assumes no responsibility for the accuracy of the data provided by outside sources. 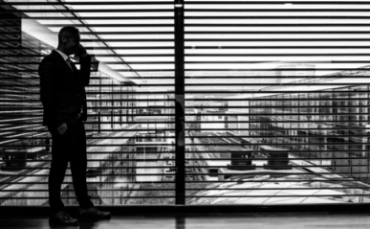 Bond ETFs are seeing major inflows as of late because they have liquidity advantages over their underlying bonds and they have tax benefits. However according to Todd Rosenbluth, research head at VettaFi, in a conversation with MarketWatch, Vanguards Total Bond Market ETF, BND, is standing out from the crowd. One of the main advantages that BND has is investors transitioning from mutual funds into ETFs. Additionally, investors are capitalizing on tax-loss harvesting in the bond market which has taken a hit in H1 2022, both of these have been wins for BND. Vanguard users can also easily transition from mutual funds to ETFs. Moreover, investors are looking for safer storage of money, and shorter-duration treasuries and bonds are a good place to do that.

Finsum: The liquidity mismatch in the bond market is a huge advantage for ETFs and investors should heavily consider this.

Oil Peak Could be Over 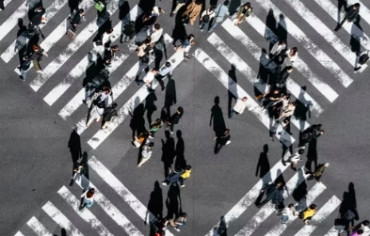 Policymakers have been begging for a break in Oil and gas prices and the last week finally started to see the turning point. While demand is beginning to soften, which no doubt will help loosen the tight oil market, a surge in Libyan crude output pushed futures lower. Adding to that are the overwhelming signs that oil prices will also fall if the global economy takes a step back. Markets are preparing for recessions in the U.S. and the Euro area. Central bankers across the globe are committed to subduing rampant inflation and as much as a 1% hike in the Federal Funds rate could happen at the next Fed meeting. A recession would significantly reduce U.S. oil demand.

Finsum: There is still plenty of pressure on Oil prices with the War on Ukraine continuing, and supply bottlenecks are still the driving force.

Twenty years ago, ETFs held a fraction of the assets they hold today, but the cost-efficient product wrapper would go on to disrupt the investment management industry and see trillions in assets under management. Is direct indexing the next major disruptor? According to management consulting firm Oliver Wyman, customized solutions are expected to grow to $1.5 trillion by 2025 from $350 billion in 2020. That represents a 329% increase. Since investors typically face specific risks that are unique to only them, the demand for customized investing solutions is expected to explode. Where ETFs were able to provide cost and tax benefits over mutual funds, direct indexing can go a step further by not only minimizing capital gains taxes but placing restrictions on holdings using criteria such as ESG. Previously, customization was limited to ultra-high net worth investors, but with companies such as Vanguard and Fidelity offering direct indexing solutions, more and more investors may opt for more customized solutions.

Finsum: With assets under management estimated to jump 329% by 2025, direct indexing is expected to become a major disruptor in the investment management industry.

While large-cap stocks get most of the press during earnings season, small-cap earnings releases might be a better barometer of the economy. Small-cap companies tend to be more sensitive to an economic slowdown or recession. This is due to most of their sales coming from the U.S. Large-cap companies on the other hand are typically multi-nation. Small-cap stocks also fall harder during economic downturns. In other words, if the economy was about to dive, it would be small-cap stocks that would be reporting poor earnings. But so far, small-cap company earnings are looking strong. According to an analysis from Credit Suisse, small-cap earnings projections are running 6.4% above their historical trend. This compares to 1.3% for large-cap stocks. Small-cap stocks are currently outpacing the market with the S&P 600 small-cap index outperforming the large-cap S&P 500 index.

The U.S. is facing a significant risk of a recession with the upcoming GDP release Thursday, but experts say this is overblown. Technically a recession is determined by two straight quarters of GDP growth and negative growth in Q1 its possible the U.S. could technically hit this mark. However, the market is pricing in 1% GDP growth for Q2 currently. Additionally, economists say the signs aren’t really there. GDP slowed in Q1 mainly due to government spending, consumption and investment were both positive. Moreover, the labor market is extremely tight. Job openings, payroll growth, and unemployment all point to a robust labor market. However, there have been yield curve inversions which is a leading indicator of recessions.

Finsum: Yield curve inventions could be driven by inflation premium in the two-year treasury and not real recession risk.

Published in Economy
Page 7 of 36