How the Markets Will React to the Midterms 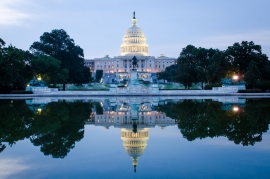 As the midterm elections are starting to heat up with various primaries, it is time to revisit how the elections will impact markets. Because Republican victories in the House and Senate would simply be a continuation of the status quo, the big question seems to be what happens if Democrats win one or both. The answer is that there will likely be little impact, but if there is, it could be positive, according to Barron’s. This is because having Democrats control the house (perhaps a likely outcome) would be seen as keeping the White House’s potential overreach on trade and the economy in check.

FINSUM: Historically speaking, the midterms have resulted in strong rallies for stocks. Why wouldn’t it be the same this year? We expect either little effect or a positive one.

Published in Eq: Large Cap
Tagged under
More in this category: « These Retail Stocks May Surge Walmart’s Stock Has Legs »
back to top