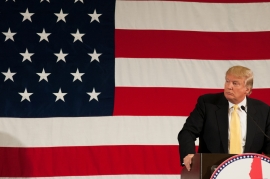 No matter which side of the aisle you are on, the last several weeks have not been great for the president’s reelection chances. While there are certainly a large portion of “silent” Trump supporters who will vote for him in November, the trends in the polls are not looking good. In particular, Trump seems to be losing ground in what is emerging as the biggest battleground of all—Florida. In 13 of the last 14 elections, the candidate who won Florida won the election. Based on how other key states are heading—Michigan, Ohio, Pennsylvania, Wisconsin—it seems like Trump must win Florida to take the election. One Republican strategist in Florida said the trends in the state were not good, concluding that “Obviously the triple whammy of the virus, the pandemic-induced weak economy and the social unrest have taken a toll on President Trump’s poll numbers”.

FINSUM: Trump has strong support in much of the Latino community, which should help him. But his polls numbers for the state’s key 65+ population have been weak, seemingly as a result of the virus, which is working against him.

Published in Politics
Tagged under
More in this category: « Twitter Starts Undermining Trump If Republicans Sweep the Election These Stocks Win »
back to top