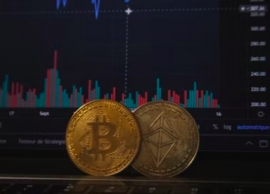 Cryptocurrencies are no stranger to volatility but the latest fluctuations could prove terminal at least for the companies. Goldman Sachs downgraded Coinbase Global to a sell this weak as the stock tumbled by almost 10%. The new price target according to GS is $45 which is a far cry from the +$300 it traded at after it IPO’d. While bitcoin, Ethereum, and the rest of the asset class may survive the slowdown companies supported, or rather supported by, crypto might not make it. Bitcoin has lost 55% of its value which is putting lots of pressure on the revenue streams of the company forcing layoffs and other drastic measures. Just recently Coinbase cut nearly a fifth of its workforce in order to weather the brunt of the storm.

Finsum: This might not prove fatal for bitcoin but could for the companies relying on the asset, even international troubles and inflation aren’t lifting up the asset class yet.

Published in Economy
Tagged under
More in this category: « Big Bear Year For Bond ETFs Excellent Fixed Income ETFs for 2022 »
back to top